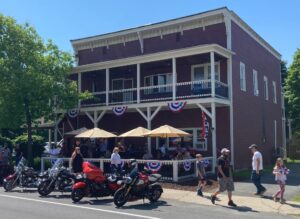 The Auction Barn in Argyle, Salem Tavern in Salem, and The Bog in Cambridge each announced they will close.

A post on The Bog’s Facebook attributed to owner Mark Harwood said, “after much thought and painful deliberation, I am closing The Bog.”

“In the 3 1/2 years I’ve owned The Bog, I’ve come to the realization that a restaurant has to have the owner there several hours daily,” he said.

“With my construction company keeping me much too busy, to give The Bog the time and attention it and the customers deserve, I’ve decided it’s time to move forward and look for an owner who has the time required…” he added.

The Salem Tavern posted “with sad news that we announce after 18 years of being with you that we have decided to close the doors and sell.”

“We’d like to thank everyone who supported us over the many years. The sale is pending and the new owners will take over soon,” the post added.

A picture posted by Salem Supervisor Sue Clary showed a sign on the tavern’s front door that said it would “be closed for a few weeks.”

The Auction Barn restaurant in Argyle also closed on Sunday, October 23. “The Auction Barn has been a staple of the community for over 60 years, it is with a heavy heart that we announce the closing of the diner,” read a post on Facebook.

The Albany Times-Union broke the story. Reporter Wendy Liberatore quoted owner Brady Wolff, “I guess it doesn’t matter where you are or what kind of restaurant you have, you cannot get labor and the inflationary costs have put us to a point that it’s not profitable.

“We don’t want to raise our prices so the community can’t afford to eat here. There is nothing left to do,” he said.

Share
Previous Step by step: How she built a small business
Next Our November 3 front page